Even the railway trip of around one and a half hours from Agra west to Bhartpur offers  varied images that made the hunt more desirable and raised expectations about the day’s events. At a small pond we were passing by we could see pelicans, three types of storks among them the mighty black-necked stork (Xenorhynchus asiaticus), beautiful sarus cranes, geese. ducks and numerous other water fowl. Into the jungle fled a flock of nilgais, „blue bulls“ (Portax pictus), which I see here for the first time: They are large animals in the form between  elk, deer and cow. The head is small, with curved black horns, the neck is strong with a long beard, the shoulders and the croup like the elk’s; the legs are strong and sinewy;  the bulls are gray and on the extremities black; the cows and calves are fawn brown. Furthermore there were wild boars visible along the tracks.

In Bhartpur Station I was received by Maharaja Sri Bridshindra Seiwaj Jeswant Jangh Balladur, a small very gloomy and gruff looking ruler who shouted out every word wrathfully. He is said to be in no way a kind and good ruler and given his advanced age not very discriminating in the choice of his entertainments. He rules a nominally independent state, but as other princes under British dominion he has a resident at his side who helps carrying the burden of government. The prince of Bhartpur is a descendant of a Jat named Churaman, who fought against Aurengzeb and created the splendor of that dynasty which occupied Agra from Bhartpur in the years 1760 to1765. Since 1826, however, they had to give up independent politics and accept the British supremacy. The populous families of the Jats are, like many tribes in Rajput in the land between the two rivers Ganges and Yumana, Indo-Scythians, that is of Aryan-Central-Asiatic origin and are almost all devoted to Islam.

Escorted by a mounted lifeguard, we drove in a luxurious carriage through the city which is enclosed like a fortress by a very strong wall with towers and a water ditch. Bastions and mighty well fortified gates increase the power to resist of the fortress city.

The English managed to conquer Bhartpur only after hard fights and using all means of the European art of war. The siege of these fortifications of the Jat prince Ranjit Sindhia by the British forces under the conqueror of Hindustan, General Lake, during the years 1805 and 1806, ended with the capture of the fortress protected by its water works and defended very bravely only after Lake, who for a long time did not have the necessary siege train and equipment for a real siege, started full siege operations and concentrated the whole Bengal army there. In the year 1826 too, Bhartpur put up determined resistance against the British besieging forces until the commander of the English troops, Lord Combermere, succeeded after a six week siege to create a breach in a part of the bastions and take the fortress by storm.

The city had a population of around 60.000 inhabitants. In the streets stood a large packed crowd who acclaimed us with big shouts. Striking was a group of monkeys that ranged around on the roof of the houses. When we reached the palace of the resident, Colonel Martelli, the maharaja presented me to his two sons with a few words murmured into his sparse beard, one a somewhat spent youth of nineteen and the other a handsome intelligent looking boy of five years.

After the maharaja had retired, the parties split as Wurmbrand and I went hunting black-bucks and the forbidden nilgais, while the other gentlemen went after the waterfowl. In a large ceremonial carriage with a green silver-embroidered coach box blanket that are sometimes used at Corpus Christi processions or on special court feasts at home I drove through the jungle laughing mightily about the new mode of hunting wagon I was using. But as probably all that was moving in the whole area had fled on sight of my carriage I left it soon and advanced, seeking my chance, into the jungle. The development of pomp and circumstance, the use of ceremonial carriages and escorts to a hunt are probably well intended and are a testament to their good intentions but bare of any practical sense for the hunt as any game will shy away from travelling princes as quickly as from other mortals. The prince just wants to be relieved of the role of the celebrated guest to enjoy some hunting according to the rules of that art.

The first what I saw in the thin jungle were some hares and a fox. At the edge of a small swampy pond covered with a huge number of water fowl a herd of very timid black-bucks were grazing. I only managed to wound one strong bull at a large distance. On the opposite edge of the pond I suddenly saw a goat in full flight out of the jungle and following it a panther-like animal that I could not determine at such a large distance.

Continuing my approach I saw on the left in the jungle at a distance of 100 m the legs and the rear of a nilgai — I fired and the piece was hit well so we found a blood mark and in 200 m distance from the location of the shot we bagged the dying animal, a capital bull, my first nilgai. I celebrated together with Colonel Martelli. The old story that forbidden fruit taste all the better! Quickly we sent the bagged piece secretly to the station in order that the maharaja would not be informed of this and our bull reach Agra safely.

Then we went across a pond into a thicker jungle rich in game where I met multiple herds of black-bucks but managed to kill but one strong male in full flight. Everywhere in the dry grass jackals and peacocks were rushing around while thousands of pigeons flew over me. In the far distance I saw some single nilgais without being able to take a shot. A too audacious jackal perished from a bullet of mine.

Now came the main part of any hunting trip in India in which the different parties reunited for a luncheon. Used from my hunting trips at home to lay down on mother earth’s soil and eat something cold, I can not accustom myself to the English practice of a lavishly hospitable hunting breakfast. With my feeling of a hunter’s heart and the poetry of the jungle and the ranger life it is not possible to combine it with an opulent luxurious meal. To accept tiredness, hunger and thirst are also part of the steeling joys of hunting. In the midst of the jungle crossed by lianas, they have erected a dining tent of huge dimensions — surrounded by nilgais jackals, tigers, panthers and other beasts. Next to it is a kitchen tent for the preparation of warm dishes and finally another tent in which the hunters can prepare their dress and even switch into a tuxedo. The enforcement of formal dress in this jungle i did not comply with, under the threat of creating a scene. I excuse myself but I can’t do otherwise, the hunting dress is stronger than the tuxedo. in the dining tent a table has been set up as if for a wedding feast — silver fixtures, flower-filled vases, silver cutlery, printed menus. Ten courses are arranged and wines from all countries, namely champaign, flow freely. Thus a hunter’s frugal snack mixed with a drink out of a flask is turned into a  fête champetre, to a successful end of a country-side trip undertaken only with ladies. Thus we breakfasted during some hours only to return to the hunt heavy and dull. The announced hunt for waterfowl turned out to be quite interesting and original.

Three large ponds separated only by narrow low dams extended to create an important water and swamp area, truly swarming in game in the real sense of the word. The ponds are enclosed by thick water rich jungles which provide cover for nilgais, gazelles, jackals and all kinds of water fowl. Before the first shots were fired one could see cranes, all kinds of storks and egrets, geese, ducks, cormorants, coots, grebes,  snipes and water striders while in the air eagles, vultures and harriers of all kinds were circling. A sea eagle caught a fish from me out of the water.

We took up position behind umbrellas on one of the narrow dams. On a given sign, the drive through the can brake and the pond started towards us. As drivers, they used seven large elephants that waded willingly on their own into the deep water and scared up the game. After the first shots real clouds of waterfowl rose up into the air which were eagerly taken under fire by the line of shooters. Never before have I seen such masses of waterfowl in one and the same spot. Unfortunately the rare and timid creatures, especially the cranes, storks and herons, fled quickly so that I bagged only two snow-white  great egrets (Ardea alba, in winter plumage). For a long time I could observe with the eye the swarms of cranes and storks at an immense height. Without interruption flew single specimen as well as full flights of geese and ducks above our heads so that we soon had bagged over 100 pieces. If the flights returned to one of the three ponds, one of the elephants advanced at a slow place to scare the fowl up once more. Both Wurmbrand an I shot rare geese; but the incapable retrieving coolies could not find the shot animals. Furthermore I bagged many ducks, mostly maillards (Anas boscas), then gadwalls (Anas strepera), shovelers and northern pintails (Anas acuta), as well as cormorants and five bald coots.

The other gentlemen had also killed many ducks mostly of species common in Europe. Only Captain Fairholme shot a rare spot-billed Duck (Anas poecilorhyncha).  The latter was very lucky in his hunting as seven otters came swimming towards him, only a few feet away, of which he shot one. To our question why he had not shot the others too he answered: „What should I have done with all the others?“ One cannot eat otters and the English kill in India strangely only carnivores as well as edible game while other animals normally are not hunted even though they might be interesting.

After two hours the hunt came to an end but we tried a combined tracking through the thorny bushes as a final attempt. I killed a fleeing exceptionally strong nilgai bull and wounded a black-buck  which we couldn’t, however, find due to the limited time for a search. During the return drive I shot a nilgai cow in the jungle from the dam.

The hora legalis for the return to Agra had been long past and the special train had been waiting for two hours when I arrived at the station together with the Maharaja who had joined me in the city. The somber ruler asked vividly about the results of the hunt but he was not informed about the frowned upon nilgais except one shot „due to a mistake“. A tiny hint of the resident that the nilgais were damaging the crops seemed to pass unnoticed by the prince. At the departure of the train, 21 salutes were fired and after one and a half hours, we were back in Agra where we found to our disappointment that Kinsky was still sick. 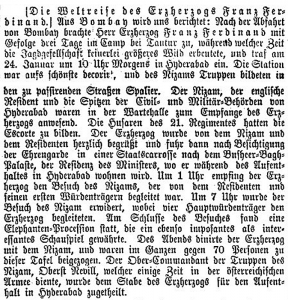