I was still in deep sleep in my cabin when the officer of the watch awakened me with the surprising message that our corvette “SMS Fasana” had come in sight. Quickly I went to the bridge where we could see the corvette move toward us with full sails. Everyone on SMS Elisabeth was very excited and, by and by, all had come on deck, the standard was hoisted, boats were readied. It was a matter of offering greetings to a piece of homeland, one of our warships, returning comrades who had circumnavigated the globe and unfurled our proud flag in far away seas.

The valiant “Fasana”, that felicitous sailing ship, one of our mission fleet, has already undertaken repeatedly hard and dangerous transoceanic journeys and always splendidly proved its value. This time, her performance was bound to attract the common admiration of all the maritime world. The corvette managed to survive one of the most heavy typhoons in all oceans with but limited damage, while large steamboats such as the P. & O.-Steamboat “Bokhara” had sunk.

„Fasana“ greeted us with a flag parade, a 21 gun salute and a rigging salute (“Wantensalut”). We stopped our machines while Fasana bracked back and I went over with a boat on board of the corvette. There I was received bit her commander, Captain Ripper, who introduced me to his staff, including the twenty embarked cadets among which was a Mannsfeld. The interesting journey of Fasana offered much to talk about, especially the stories about the typhoon in which our hardy sailors had shown their glorious mettle and skill. In the heaviest storm and most intense rolling of the ship, the crew had to change the topsail, while the water splashed across the deck and the corvette lost two of her boats. In order to give us a better understanding of the action performed under such trying circumstances, a changing of the topsail was demonstrated.

In the ship’s rooms, which we visited in all its parts,  were many objects from Japan from the recent journey.

Of eminent interest is the machine of “Fasana” which used to be on the frigate “Schwarzenberg” and had been in action during the battle of Heligoland and the battle of Lissa.

Deeply moved we took leave from our comrades. Gun salutes and Hurrahs resounded while both ships resumed their courses, “SMS Elisabeth” towards the south, “Fasana” towards the north”. There flies one of the ships into the distance, towards far away destinations while the other, barely saluted, disappears to rejoin her homeland after a journey of sixteen months! With full sails, illuminated by the morning sun, resembling a gull flying above the clouds, the corvette disappears quickly from our view. The uplifting impression that the 700 compatriots had made in the meeting of two ships of our war fleet in the waves in the midst of the ocean lingered on for a long time in my heart.

In the morning the captain and the older officers of all charges paid their respect and delivered the official new year’s greetings. Then our dignified boatswain and the master gunner visited me to the same purpose in the name of the crew. After church service (mass), with the issuing of the orders of the day, promotions of the crew were proclaimed.

Today I finally succeeded to catch a flying fish on the bridge.

The humidity of the air is increasing despite the ongoing Northeast Monsoon so that the psychometric difference amounts to only one degree. 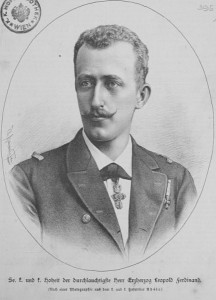 The wind blew fresh from Northeast and cooled the temperature down a bit. A large number of flying fish swarmed around our fore, often covering considerable distances to do so. Multiple gannets flew by quickly.

To the New Year’s Eve party, I had invited all staff of the ship. Again, an improvised game of luck on the aft had to be at the center of the party in which the most incredible objects served as prizes. Hilarity and humor covered a lot of defects, especially the tropical warmth of the champagne. The ice reserve on board was totally depleted and replenishment had not been possible, as on the one hand our ship’s cook found that all reserves of ice in Aden were sold out and on the other hand our ice making machine had broken down in Steamer Point and had not been repaired yet. So instead of cool drinks, a warmed up brew had to be served, namely punch made for us by our chief medical officer.

After the ship’s clock had announced the twelfth hour and the New Year shot fired, we welcomed the new year first with the people’s hymn and then to the sound of the Radetzky march with a shout of three times Hipp Hipp Hurra, which all men joined in too.

The good old moon and the nearly cloudless starry sky illuminated the scene on deck. All congratulated one another most cordially, and again many new year greetings filled the air while many intense thoughts were sent through the silent night towards home.

In the morning, we catch sight of the island Socotra and pass it at noon about 15 miles north from the east end of the island. The view of the island reminds me of the coastal region of the Red Sea. Noticeable are only the snow-white sand moraines that almost look like glaciers from a distance. This island, 7,770 km2 large with around 4,000 inhabitants, has been ruled by the sultan of Qishn. England entered into a subsidies treaty with it in 1876 and then turned it in 1886 a treaty into a British protectorate. Socotra has once been offered to our government for sale. But I think such a purchase would not have been a good investment, as one can see no vegetation apart from a few coconut palms and only as a coaling station and a prisoner colony could it have had any meaning for us.

The impressive sunset was followed by an enchanting night. It was balm for the soul to breathe in the fresh Monsoon on the bridge.

Up to now, we could allocate only a few hours to study travel literature. Today was given almost entirely over to this useful activity. As quickly as we are getting closer to countries afar which are on our itinerary we are eager to prepare appropriately and educate ourselves.

In the travel library, there was no lack of choice among the rich variety of books even though its composition had to take the restricted cabin space into consideration. Besides publications, rich in scientific spirit, that serve the traveller as sources are handbooks essential for tourists as well as works that successfully combine a captivating style with scientific content about the countries and peoples. Finally, there is light reading in the genre of travel literature that are sometimes glossy and feuilletonistic in its accounts. Maps and plans of all kind complete the literary inventory.

After dinner all met on the bridge to enjoy the passing away of the wonderful evening.

Fierce shots whose echo resounded from the valleys of Shamsani woke us up in the morning. These were the salvoes of the battery of the English fortress that exercised shooting at moving targets out in the sea.

Again, a small market developed at our gangway, then our consulary agent bid farewell and we hoisted anchor and exited the harbour with a course towards the East.

The day is beautiful, a small blast of rain brings refreshment, even though the heat no longer feels as oppressive as in the Red Sea. Only the cabins remain steam baths, with the thermometer seldom sinking below 30° Celsius. Some steam boats are passed and a large school of fish observed.

One of the two goat kids we took on board in Aden and named Max and Moritz, namely Max, a most lovely animal, jumped over board in a suicidal manner and must have soon become the prey of a shark. Moritz got over the loss of his comrade quickly and gaily jumped around the cabins, nibbling zwieback, cigarettes and sugar.