Archduke Franz Ferdinand of Austria-Este (1863-1914), heir to the Austro-Hungarian Empire, owes his place in world history to being in the wrong place at the wrong time. Franz Ferdinand was murdered in Sarajevo in 1914 by a Serbian nationalist despite Franz Ferdinand’s fervent opposition to a war against Serbia and Russia, though for the wrong reasons: He did not want to annex „a bankrupt country full of regicides and rascals“ (Königsmörder, Spitzbuben etc.).

Despite his Hobbit-like distrust of anything foreign and modern (except in the matter of guns and weapons), Franz Ferdinand undertook a journey around the world at the end of 1892 to 1893 and discovered the planet, partially to recuperate from tuberculosis, partially to experience a bit of freedom from military and court life. His edited but still spicy (and today obviously racist) notes and observations of that journey were published as two volumes in 1896. Despite the publisher then reserving the right to publish it in other languages, translations were never made.

I invite you, Dear Reader, to follow Franz Ferdinand’s world tour of 1893, day by day, in a new translation into English. This is a work in progress and help is welcome.

The first stage of creating a first pass translation of the two volumes has been completed. The second stage will consist in correcting, improving and polishing the translation as well as in annotating and illustrating the text.

The Editor can be reached at: passepartout -AT- franzferdinandsworld.com. 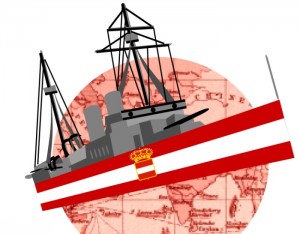