Baedeker’s Southern Germany and Austria, including Hungary, Dalmatia and Bosnia: handbook for travellers (1891) notes on page 195f: „Vienna (436 ft.) is the capital of the Empire of Austria, and residence of the emperor, lies in a plain  surrounded by distant mountains, on the Danube Canal, the southern arm of the river, into which the Wien falls within the city. Since 19th December 1890, when the former suburbs were incorporated with the town, it is divided into 19 districts („Bezirke„). According to the census of 1890 the interior of the city had a population of 65,750; the whole town 1,355,255 inhabitants, including a garrison of 22,651 soldiers.“

„The internal fortifications were leveled in pursuance of an imperial decree of 1858, and the space used for the erection of the Ringstraße, a broad street encircling the interior of the city. Of the former gates the Burg-Thor and the Franz Josephs-Thor now alone remain. Outside of the Ringstraße  and parallel with it, runs the Lastenstraße, while the Gürtelstraße will, when completed, form a circle round the whole city beyond the Lines. The Church of St. Stephen is the central point from which the numbers of the streets are reckoned, No. 1 being to the left, and No. 2 to the right. The plates with the names of the streets leading towards the center are rectangular, of those running round the city oval.“

Travelers are advised that „at the Austrian frontier, playing-cards, almanacs, and sealed letters are confiscated if found. Tobacco and cigars, the sale of which in Austria is a monopoly of government, are liable to a duty of 10-25 kr. per lb., besides which a licence fee of 7-11 fl. is exacted. According to the strict rule, one ounce of tobacco and 10 cigars only are exempt from duty.“ 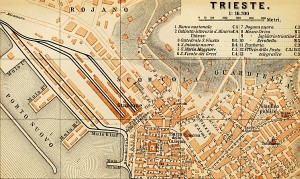