Already while waking up, I noticed that the sea must be running high as rolling movements were felt strongly in the cabin. After having tediously dressed myself with the assistance of a marine servant, I went on deck where I met many a distraught face as Father Neptune demanded his first victims. A stiff breeze was coming from the North-East and wave upon wave crashed upon the deck. Otherwise the day was clear and the sky above us painted in an intense blue.

In the morning, the assigned meeting of the staff and the mass in the battery had to be canceled due to the strong rolling motions; only at noon, when we arrived near Crete, was the sea calming down. We changed our course slightly and navigated alongside the coast of Crete and between it and the island of Gavdos. Crete offers picturesque scenic sights. The peaks of Mount Ida at up to 2457m crowned the view, while steep rocky sides fall off towards the sea. The island seems to be almost as poor in vegetation as in human settlements, despite their numerous markings on the map. Only on a few prominent spots were visible small white buildings, apparently monasteries or churches. The snow on Mount Ida, reaching far down, the violet-red illumination of the mountains and the deep blue sky united into a powerful panorama.

After lunch, a raffle (tombola) for the crew was arranged as a Sunday distraction for which all the off-duty crews had assembled on the middle deck. Our good boatswain – the good old school type, with a certain animosity against all modern maritime fixtures – called out the numbers in the manner that he combined each number with an Italian joke word what caused much amusement. Wine, cigars and other trinkets served as prizes.

In the evening, a procession in honour of my birthday was organized by the sailors. The procession was very successful and amusing, attesting to the humour and imagination of our peoples. With the simplest means such as flax tow, grime, broken belts, fish hooks and so on, they managed to achieve the funniest effects. Behind the music band marched in first position an Italian choir that produced a number of well-tempered songs; then followed a Bohemian music band, dressed in various uniforms borrowed from the cadets, that played the known song „Nejde to“ in the most audacious modulations. At the same time, an animal tamer lead a large group of lions, apes, elephants and camels. The elephants were especially imaginatively constructed: a two-man team had covered themselves with a tarred gun cover and used the barrel protection as its trunk. A very uncanny beast with a moving mouth studded with teeth, a crossbreed between a marabou and a crocodile had been born in the shoemaker’s workshop. A Schrammel quartet filled the air with real Viennese melodies. In conclusion a magnificent chieftain led a horde of jet black Zulu kaffirs who shivered in the cold faced with the stiff north east breeze dressed only in their swimming trunks and a coat of grime. The savages carrying a banner with my name roared “hurrah” and danced lustily. Their lively movements warmed them somewhat up in their skimpy dress. As the music incidentally used the common rhythm of a jolly polka all the sailors were dancing pair-wise in rounds.

The easy gaiety of our sailors made a favourable impression. Given the severe even harsh and dangerous demands of the service, this can be seen as a proof of the physical and psychological sanity of the crew and also attributed to the good influence of a well-regulated military lifestyle. It is good to see how the members of the most diverse nationalities and countries share a common bond. Germans from Lower Austria, namely from Vienna, from Upper Austria, Salzburg, Styria and from other countries, Slavs from Bohemia, the Croatian coast and from Dalmatia, Italians and Hungarians are fully intermingled. Notwithstanding the individual nationality, the polyglot crew feels to be joined together to form a part of the service under one proud and glorious flag. This nurtures and strengthens the awareness of the union of all nationalities under own ruling family and in one common fatherland – certainly an educational outcome of military service that can not be cultivated and promoted too carefully enough. 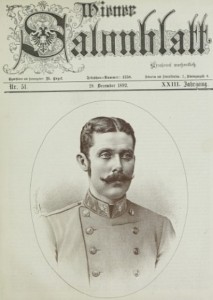