Today’s hunt was pretty much a failure, but the true hunter is well advised to remember the saying. „Every day there may be a hunt, but there will not be a catch on every day.“ The weather was just as splendid as it in in our country during especially fine September days.

The morning report said that a strong tiger had killed 11 km to the north of the camp. We therefore should leave quickly and go to the spot of the kill. The hunting and hauda elephants had already left, we followed them in a very pleasant ride through green shala woods to the hunting ground situated almost at the foot of a mountain. There we were received by the shikaris whose faces showed disappointment. The reported that they had already formed a circle but couldn’t find the announced tiger. The native hunting masters as well as the resident who had ridden with us were also very disappointed and after a long war council, had sent out trackers to check the most suitable places in the surrounding areas. Unfortunately in vain.

A breakfast had to save the situation. Afterwards, in want of tigers, there was a  general shooting with meagre results despite spending four hours on it. The good-natured natives were very unhappy about the day’s failure and sent out many people out on the same afternoon to search for tigers in order to promise with certainty a tiger the day after. 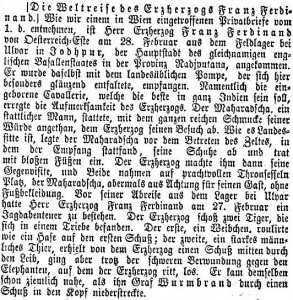