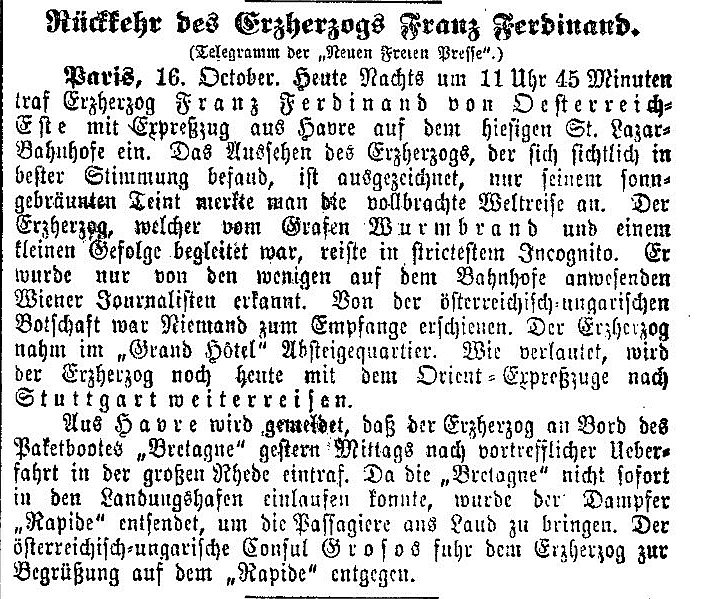 We steered into the channel and again in the thickest fog but — „a good ship in its dark yearnings is well aware about the right way“ ((A quip on a Goethe quote substituting ship for human: „Ein guter Mensch in seinem dunklen Drange ist sich des rechten Weges wohl bewußt.“ (Faust: Der Tragödie erster Teil, Prolog im Himmel). )), so that „Bretagne“ managed to find her wet path and, using the steam whistle almost continuously, advanced without danger past the numerous approaching vehicles of all types crossing her route. Among them was also her sister ship that had set course for New York and passed „Bretagne“ very closely. Finally, finally — it had become lighter around the ship — in the distance appeared a white strip out of the ocean — „Land, land!“  we said to ourselves. The coast of France stopped the ocean waves and Havre welcomes the newly arrived in a friendly manner.

At 3 o’clock in the afternoon the anchor was dropped and shortly afterwards we stood on solid ground, European ground. One has to have travelled around the world for nearly a year to appreciate the joy that filled me at that moment.

The city was already dressed in festive bunting in honor of the officers of the Russian fleet that was anchoring at Toulon. The foreign sailors were excepted to arrive in Havre from Paris as the guests of France. Soon after the arrival we undertook a drive towards Trouville in the company of our consul Grosos and attended a dinner in the evening in Grosos‘ hospitable house whose wife gave us the honor in the most kind manner.

From Havre we went to Paris.