The sea was totally quiet. A fresh wind brought cool air. The day was glorious. At 10 o’clock Sunday mass was held. The whole day was spent writing letters as in Bombay one could mail it home. Towards noon, the Indian coast became visible as we were driving about ten miles distant from it. Only the blueish contours of the land are recognizable. In the evening, one could distinguish numerous fires on the coast whose meaning we could not explain. 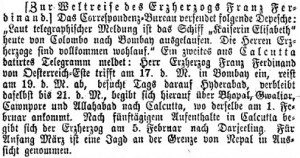 Notice in the Neue Freie Presse 15 January 1893, p.4, about Franz Ferdinand’s arrival in Bombay and his itinerary in India to Nepal.