The evening before the sky had been completely clear and a sea of stars were twinkling down on us. During the night the weather changed, though. A torrential rain awakened us from our sleep and also in the morning it was raining cats and dogs. Nevertheless it was time to hunt and even more so as two good messages arrived during breakfast. The first one said that a tiger had caught a head of cattle in a small settlement about 15 km distant from the camp and had been confirmed by the peasants. The second one said that hunters sent out with elephants near the camp had seen two tigers enter the jungle and had encircled them there on the spot. No time to hesitate. Quickly we mounted the fast elephants and hurried to the spot where the circle had been formed.

The resident quickly assigned every one to a position, the remaining gaps were closed by riding elephants and three shikaris advanced like the day before into the interior of the circle. On my right side there was a young forest, on my left a jungle of high reeds. After only a few moments I heard elephant guides shout on my right, their animals being in commotion and through the reeds I see a tiger-like predator flee towards the jungle. In the moment when it wanted to jump into the jungle, I shot two times and thought to have scored. The shikaris were still running around in the grass and the reeds until Kinsky and three of his neighbors fire when I saw the grass in the jungle move as if a large head of cattle was dying. I rode to the spot and found a very strong, already dying panther there killed by Kinsky, while on the spot where I had fired lay an extremely strong, dark colored panther with two shots in the chest. The two bullets entered so close next to each other that they were found one on top of the other on the rear shoulder blade when the panther was prepared. The error of the shikaris to initially take panthers for tigers can be explained by the rare strong size of the panthers. Killing a panther filled me with even more joy as it was my first kill of one.  But it was far from being over yet! Better things were bound to come.

The hunting council consisting of the resident and local leaders of the expedition decided to go after the tiger that had eaten a peasant’s head of cattle for breakfast despite the distance of 15 km. What matters distance to enthusiastic Nimrods if there is hope to catch a tiger!

When we arrived on the spot, the shikaris who were meeting us reported good news of three confirmed tigers but difficulties with the jungle. The first part of the message was electrifying, so we could hardly await the arrival of all elephants. The second message was not discouraging even if crossing the jungle was very difficult. We had to enter a thick forest overgrown with lianas which offered a picturesque view but also forced us to fight for every step. Elephants and knives had to work together to create a path. A consequence of the impenetrable thicket was that a shikari with his assigned shooters, among them Wurmbrand, Clam and Kinsky, lost his bearing and I arrived only with Prónay and the English gentlemen on the spot where the circle was to be closed.

The tall grass thicket in which the tiger was said to be had a diameter of barely 50 paces and formed a regular circle enclosed by a dense ring of trees. Before one could get to track the tigers, the elephants had to do hard work. They had to crush all trees at the edge of the jungle on a 10 meter band so that a tiger could not escape under the cover of a tree and there was no obstacle in the way in case a tiger attacked an elephant. In the incredible short time of a quarter of an hour this Herculean task was completed. The elephants pushed their head and tusks against the strongest trees, snapping them like straws. Bushes and smaller trees were rooted out with the help of the trunk. It seemed like this work was effortless for these mighty animals.

After the elephants had also trampled down the grass in front of the line of shooters, the shikaris advanced towards the middle of the jungle. One of the elephants soon trumpeted to mark the presence of a tiger that quickly tried to escape in full flight between me and one of the English gentlemen. Terrified by the sudden appearance of the tiger, some of the younger elephants started to break but where brought back in line by hard beatings. My elephant stood still like a pillar. Forced back by the shouting, the tiger returned into the jungle but not before my neighbor had tried to fire just before me in the heat of the moment. Fortunately, he missed and I sent a bullet after the tiger which was answered with a roar out of the jungle cover.  The shikaris rode incessantly within the thicket so that soon after the first tiger a second one ran out on which I fired twice and Crawford once.

Led by the shots into the right direction the lost shooters finally arrived and took up their positions in the circle whereas Clam and Kinsky  came to stand beside me. Within the circle, the level of activity rose. The elephants trumpeted, the tigers roared. Suddenly, a tiger turned towards a retreating elephant and jumped on its back clawing both paws in it.

Similarly critical was the situation when an elephant fell during a sharp turn and was attacked by a wounded tiger which put the mahaut and the shikari in danger to be thrown down and caught by the tiger. These serious Intermezzi ended without accident as the tigers aborted  their attacks and returned into the grass where I hit the already wounded tiger. Kinsky shot, shortly after he arrived there, the tiger wounded by me — a splendid specimen. A few minutes later two healthy roaring tigers darted out in close sequence in huge leaps towards Clam’s elephant. Crawford killed one, Clam the other beast.

On the other side of the circle in the mean time, a rapid fire was opened which resulted in a shot up minor tiger in tatters which was awarded to the English doctor of the expedition. The participation of the doctor in the hunt did not find the approval of my personal huntsman who was of the opinion that a doctor should stay in camp with the wounded. Fortunately there were none despite some of the gentlemen eagerly shooting at every bush that seemed to move and even the heavy paradox rifle of one of the shooters sent its load directly above our heads. No consideration was taken in terms of who was closest to a tiger and who was therefore suited to shoot. But we always knew who among us had shot first and who scored, so that there was no doubt, as we furthermore knew our own shots, that I had shot two and Clam one tiger. Otherwise it would have been difficult to decide as all tigers were full of holes like a sieve.

Thus today too resulted in five tigers. To catch in two days of not particularly favorable weather ten tigers and two panthers was indeed hunter’s luck that nobody of us had dared to dream about.  This splendid result could only be achieved by excellent organization of the hunts, the skill and enthusiasm of the natives whom I can not credit high enough As the brave hathis (elephants) had especially distinguished themselves, we dispensed them as a reward from a planned general shooting and returned directly linea recta to the camp where we sent a courier to the 41 km distant telegraph office to transmit our hunting successes  home.

Hodek used his artistic hands on the bagged tigers while we duly celebrated the day’s results. 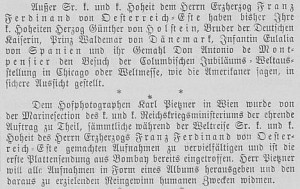 Th Wiener Salonblatt of 12 March 1893, p.3, reports which Royals have announced their attendance in the world fair in Chicago besides Franz Ferdinand.