The shikaris had reported yesterday evening that the wounded elephant had been spotted. They saw him in the midst of a herd, crying loudly so that he will die in the coming days. The other elephants are in another part of the jungle but also close to the pond. At 5 o’clock, I was ready but a hard rain kept us back so that we only entered the jungle at 6 o’clock. This time only Mr Pirie and the shikaris kept me company. Shortly after disembarking I saw three new species namely a hare (Lepus nigricollis), somewhat smaller and shorter ears than the ones at home, as well as a peacock and the majestic timid Ceylon junglefowl (Gallus lafayetti). 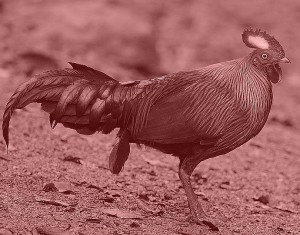 We were soon on the tracks of the elephants and stalked them in the jungle until after a short while I heard the monsters browsing branches and saw in thick bushes the legs and trunks of multiple elephants. I intended to approach them from a supposedly good direction but was unfortunately prevented by my companions who cautioned me to wait. The consequence was that the elephants escaped with great turmoil as soon as the wind changed and before I could fire a shot.

Now it also started raining very heavily so that we were truly soaked and like “wet poodles”. My companions assured me that we would soon close in again on our fugitives but this event only happened after seven hours of searching and stalking.

At first we followed the tracks but then decided that it was easier in the heavy rain to send out two shikaris to find the elephants again, encircle and confirm their location. We used the waiting time for breakfast. During the search for an apt breakfast location we met an exceedingly rare and interesting animal, a very colossal specimen of a lizard (Varanus salvator) that reminded me about the fairy tale of the wyrm (Tatzelwurm). The reptile was laying about 2 m off the path, blinking at us with its tiny eyes and didn’t move even though we were talking loudly and argued how to kill it because I didn’t want to shoot due to the elephants. Finally we cut down a young tree, Pirie approached the lizard like Saint George the dragon and hit the worm on the head. The animal thrashed its long spiked tail wildly and stirred up the earth. Multiple hits caused the animal’s skull to crack and it soon lay dying on its back. We then crippled it and opened its breast with a deep incision. 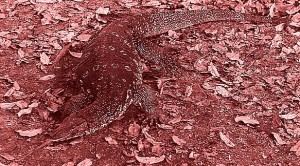 It was a giant animal: No less than 2 m long and 0.5 m of circumference and 20 cm high, it resembled a crocodile for which I had first taken it to be one. The skin was enormously thick and we could pierce it only with a sharp hunting knife. It consisted of hard scales, the back was black with yellow rings and points, the underside totally yellow, the legs were turned to the outside like those of a dachshund and had long claws. We left the strange animal on the ground, marked the place and moved to a small clearing to breakfast there while a swarm of hornbills flew over our heads.

My prudent John had brought fresh clothes assuming correctly that I would be completely soaked from the rain. As the sun was currently again shining in a friendly manner I quickly changed my dress. As soon as I had completed the change, it started to pour again and within minutes I was drenched again to my skin. But one quickly grows accustomed to such things and I even excellently slept on the ground for two hours.

In the mean time, the shikaris who had been sent out had returned with two messages. The first one was very good: It confirmed the location of the elephants. The second, however, was less so: our monster, the wyrm (Tatzelwurm) had fled and was nowhere to be found. The second message was so unbelievable that Pirie instantly ran to the spot to confirm there that indeed the reptile had disappeared. Only a small blood track led from the spot where we had cracked the worm to some steps away in the grass. I was inconsolable about having lost such a highly interesting curiosity for my collection. I could not understand how that wyrm had escaped with a broken skull and a cracked spine. Instead of attributing it to the unbroken force to live I assumed a more plausible reason, as without doubt the very living superstition of the natives knew of good uses for such a captured worm.

Still the lost reptile did not make me forget the elephants that had been sighted again. They were exceedingly disquiet and moved without interruption from here to there so that we achieved to stalk one only with great effort. I came really close and could have gotten even closer if I hadn’t noticed the elephant to show signs of discomposure as my companions again overzealously had sneaked up on me and had been apparently noticed by the elephant. It was high time. I aimed for a spot at the root of the trunk and shot. At the same moment, four more shots rang out beside me – Pirie and the black shikari had fired the reserve rifles. It is a bad habit to sneak up on the point man in the thickest jungle with a loaded gun which causes even the most calm hunter to become nervous and turn safe stalking into a difficult action.

The dense smoke caused by the five shots of in total 40 grams of powder obscured my view for quite some time and only after the air had become clear again I noticed the sad truth – the elephant had disappeared. Due to the heavy rain there was no question of continuing the stalking. Such a tropical rain can only be compared to our hardest cloudburst in our land.

A truly miserable day today. Somebody must have uttered a hunter’s curse upon me. Annoyed, freezing and completely wet I marched nearly 7 km to my boat which brought me back across the pond to my bungalow. Here I was fortified with punch and various grogs which Mr. Jevers had given me against fever. 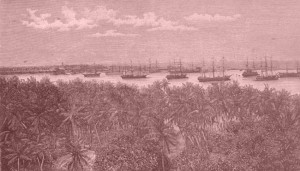