This day was dedicated to ornithology. We started in the morning to disperse us in all directions in order to bag as many different bird species for my collection as possible. 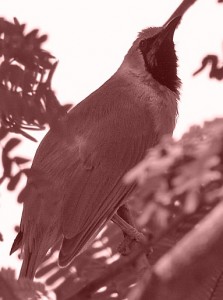 In a dense group of trees in the pond I saw to my great pleasure for the first time a group of monkeys which moved with phenomenal speed from branch to branch and executed huge jumps through the air to reach the next tree. A shot fired at great distance served only to disperse the group from view.

From the dams I drove to various smaller ponds which were full of game. I could identify snakebirds, large and small silver and purple herons, water rails, kingfishers, Indian masked lapwings and multiple darters. I also observed the beautiful lesser whistling duck (Dendrocygna javanica). Everywhere there were semi-feral buffaloes in the water which dispersed and fled as soon as a shot was fired. In one small pond, as soon as I approached, hundreds of common snipes soared up into the air.

Wurmbrand and I waded for a long time during which I managed to bag a 2 m long snake. Towards noon we were resting under a shady tree and soon all members of the hunting party assembled there, all with interesting catches.

After a reviving two-hour rest a native informed us that he knew about a pond close by with crocodiles. The Sinhalese, however, seemed to be related to some of our Alpine folks in terms of estimating distances and time as at a rapid march we had to walk more than 6 km and cross two fords to get there. We were compensated with the sight of two large crocodiles that were sunning themselves at the edge of the pond which we had finally reached. I tried to sneak up on them but the timid animals slid into the water and disappeared for good.

How forceful crocodiles are is demonstrated by a fight that happened recently between one of these animals and a grown buffalo close to Kalawewa and had ended with a victory of the crocodile which had dragged its enemy – biting into its head – under water.

Various natives brought us opened coconuts whose milk I tried but contrary to expectations found very bland and sweet.

I then killed some darters, a beautiful black drongo (Dicrurus ater) and finally returned to our bungalow where I soon slipped under my mosquito net.