Early in the morning close to Fort Shepherd we crossed the border between British Columbia and the United States and are now on the territory of the state of Washington.

In the morning the steamer moored at Northport, the final destination of our river journey. As there existed a wise custom of letting a train depart only on those days that there was no steamer, I was forced to take a special train that consisted only of the machine,  baggage wagons and a Pullmann salon wagon. I just then rented the latter one for the full journey onward. This wagon had a kitchen, comfortable sleeping spots and offered the advantage that we could hope to stay among ourselves and thus be spared to come into contact with unkind fellow passengers.

The transfer from the landing to the station at Northport is strange as the track runs straight into the river. The steamer moves so close to it that it is beached. The train literally drives into the water up to half its axis height. The traveller thus takes a big step from the ship to the train wagon while tiny fishes are swimming around the steamer and the train. Our baggage was quickly loaded into the train and now the journey went very quickly, despite the construction of the Spokane Falls and Northern Railway not inspiring much confidence, alongside the steeply falling lake shore to Marcus where the train leaves the lake behind and turns towards Spokane.

The landscape here is markedly different than that of the day before. Not very tall pine trees growing at considerable distance from each other. The ground is covered by dry yellow grass. Instead of the earlier so numerous burnt places there are here corn [maize], oats and wheat fields. Close to the farms herds of beautiful cattle and studs of well formed horses are cavorting. Noticeably many steam saws lay next to the tracks and giant stacks of cut and planed boards prove that here the value of wood is much appreciated. The possessions of the individual farmers were enclosed by barbed wire. We saw some game too as from smaller lakes and reed covered ponds rose flocks of ducks into the air an flew swift as an arrow past the windows of our compartment.

Already in Northport I had received a telegram from Colonel Cook who asked me to his regiment and camp located near the city of Spokane as there would be a two hour stop in that place. I thankfully declined this somewhat strange invitation in consideration of my incognito which led to a vituperative article in the Spokane evening newspaper that was handed to us in the wagon. The article had the laconic title „Franz is here„, illustrated with my image and was filled with mean falsehoods that did in no way attain their intended goal of offending me.  To the contrary, I found this old canard only ridiculous all the more so as various parts were unintentionally funny. Thus, for example,  the bad tempered reported exerted himself about our too numerous pieces of baggage and posed the question how this would be after I had been married . Then he criticized the „nonchalant“ knocking off of the cigar and other nonsense of this kind.

Instead of attending the parade I used the stay for a visit of the city of Spokane whose tasteless buildings painted green or red presented a not so pleasing sight. The center of a rich agricultural district, Spokane was founded in 1878 and rebuilt after a great fire in 1889. Traces of the latter can still today be perceived in the city center. The streets were full with an extraordinary amount of droppings, a situation that reminded me of small villages in Eastern Europe (Halbasien).

The two waterfalls within the city, Spokane Falls, are praised as natural beauties but are actually only weirs from which the water drops out of a total height of 45 m and which powers an lighting system numerous factories and other enterprises in the vicinity.

After a two hour stay out wagon was coupled to the main train that was fully packed with passengers despite its length and the journey onward started on the Northern Pacific Railway. 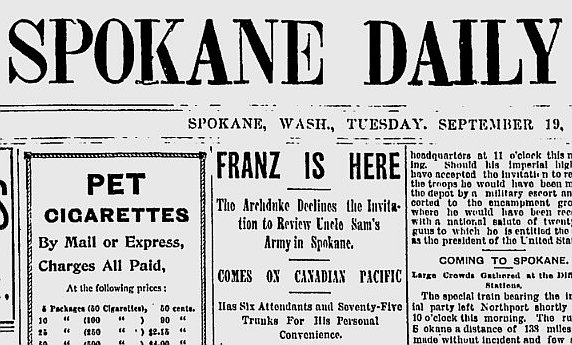